Scars of the Past Drive Toby Harris Toward the Future 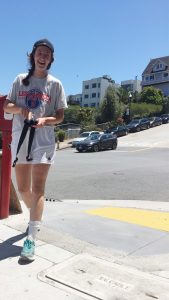 Toby gets back to running San Francisco’s hills.

Toby Harris isn’t sure whether her memories are her own or belong to the people who saw her through the darkest days of her life.

Struck by a car while crossing a street late one summer night, Toby was hurtled 40 feet through the air. After an 11-minute ambulance ride across the city, she arrived at San Francisco General Hospital (SFGH) with nine broken bones, numerous tears and lacerations to different arteries and major organs, a high-grade brain injury, and serious lung contusions–among other life threatening injuries.

“Everything I have of that night is second-hand information, or it’s in written records,” said Toby of her knowledge about what happened to her. “From what I understand, I was not expected to survive this ordeal. My sister told me I was not supposed to make it to the hospital in the first place.”

For a few weeks, if not longer, it was touch and go every day. “It feels so casual to say that,” Toby shared, “They still call me the miracle child, for goodness’ sake. Certainly, one of the many reasons I am alive today is because the city in which I was injured has a Level 1 Trauma Center. I learned that can increase your chances of survival by up to 25 percent.”

She spent over a month in the Intensive Care Unit at SFGH under the watchful eyes of Dr. Peggy Knudson and Dr. Rachael Callcut, among many other surgeons, doctors, nurses and other medical professionals. She was unconscious for roughly three weeks as the entire medical team worked to save her life. It wasn’t until the transfer to Santa Clara, where she was moved to begin rehabilitation about a month and a half after the accident, that Toby feels her own recollections begin.

Her rehabilitation was painstaking, and began first with the awful reckoning of where her injuries had left her. “I remember I got to Santa Clara, and, at first, my conception of self hadn’t been altered,” said Toby, who was an ardent athlete in high school and college. “I hadn’t realized the ways in which my life had and would continue to change; I remember asking my doctor pretty early on what sophomore year of college was going to look like for me—I asked when I could play soccer.”

The doctor was flabbergasted. “She told me I wouldn’t be playing soccer. Following my brain injury, she said I’d be lucky if I was able to attend a junior college. I was not expected to go back to school out of state.  Certainly not back to Johns Hopkins, where I had just finished my freshman year.”

Toby couldn’t walk, couldn’t shower, couldn’t brush her teeth, couldn’t put in her contacts–the new limitations seemed endless. Once she had gained enough strength, she had to relearn how to put one foot in front of the other, progressing from a wheelchair to a walker, then a cane. There was the physical piece—in addition to all of her injuries, Toby had been in bed for over six weeks and her muscles had atrophied–and then there was also the brain injury, which contributed to various cognitive challenges and new difficulties for her to contend with.

Localized injuries might impact parts of the brain related to speech or other specific functions, she explained, “But I was diagnosed with a severe diffuse axonal traumatic brain injury, and it was the highest grade you can score for this type of trauma. It’s not an exaggeration to say my entire brain was rewired to a certain extent, it can feel like a continuing process.”

And so she began the long, excruciating journey back to fuller health. “My team included doctors; nurses; and respiratory, speech, physical, and occupational therapists, among others. I am indebted to everyone who was involved in my care. I believe more than a hundred people are in part responsible for both saving my life and aiding in my recovery.”

Now, more than two years later, although Toby has been able to do much more, much sooner than the doctors and her family or friends predicted, she tries to remember that recovery is a continuing process. Her doctors and others continue to express surprise and shock that she seems so fine and is back for her junior year at Johns Hopkins now. But Toby knows things are not always how they appear—that there’s no way to prepare someone for the impact of such an event and such injuries, that this journey is still in the works.

Her scars are a physical reminder of the accident, as is the fact that her athletic abilities have been diminished and cognitive functions can still feel different at times. “I’ll never be the kind of athlete I was before. Now I exercise, practice yoga, go for runs, and train with my school’s club soccer team, but I don’t play in games, because I haven’t regained enough strength or agility and can’t risk further injury,” she said.

“It can still feel like I’m adapting to living with the changes at certain points,” she confessed. “I’ve spent a lot of time comparing myself to past versions of myself, and that’s not the most productive approach. Thinking that way can be very problematic; it can feel very negative. But I’ve gained new insights, new perspectives, new pieces and interesting components of myself—I find it helpful to focus on that,” she said. “I try not to think about the changes in a negative way—there are ways to live with this now that are constructive and can feel very fulfilling. And in moments, I certainly like the person who I’ve become.” 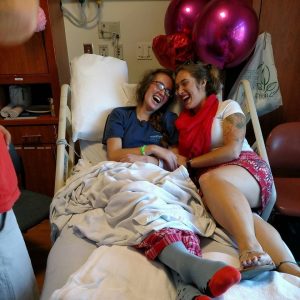 Toby with her older sister, Erin, at Santa Clara. 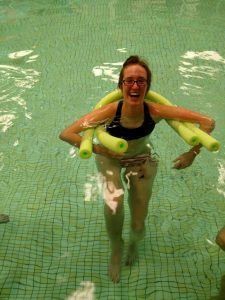 Toby gets back on her feet in pool therapy at Santa Clara. 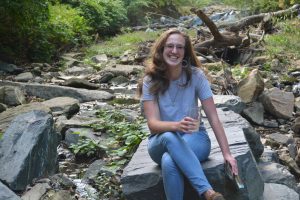 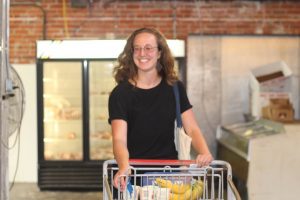 Toby back to the daily grind in Baltimore.