Since 2014, the Coalition for National Trauma Research (CNTR) has unified advocacy for increased federal funding of trauma-related research and research infrastructure. When the National Trauma Institute restructured as CNTR in 2020, the coalition has become the nation’s strongest voice for research funding commensurate with the societal burden of trauma.

NTI formally restructures as the Coalition for National Trauma Research, further consolidating efforts across the trauma community to ensure that trauma-related research is funded at the federal level at a level consistent with the societal burden of the disease.

As NTI/CNTR consolidates its efforts, it is responsible for ongoing studies including MIMIC, NTRR, CLOTT and NTRAP. For instance, CNTR was awarded a Department of Defense grant to create a National Trauma Research Action Plan (NTRAP), as recommended in the 2016 NASEM Report titled “A National Trauma Care System: Integrating Military and Civilian Trauma Systems to Achieve Zero Preventable Deaths After Injury.” Engaging more than 400 military and civilian surgeons of trauma and related disciplines, trauma care givers and patients, the NTRAP project aims to create a national blueprint for trauma research funding.

NTI launched the National Trauma Research Repository (NTRR), a comprehensive web platform for managing research data sets to support data sharing among trauma investigators. The NTRR is managed by NTI, funded by the Department of Defense, and built by the National Institutes of Health’s Center for Information Technology and Sapient Government Services.

NTI has now generated and/or managed more than $80 million directed toward clinical trauma research for 22 studies in 35 cities and 25 states, involving more than 70 investigators.

With CNTR, NTI is working to realize the recommendations made by the National Academies of Science, Engineering and Medicine (NASEM) in its report: A National Trauma Care System: Integrating Military and Civilian Trauma Systems to Achieve Zero Preventable Deaths After Injury.

During its 11-year history, NTI has generated and/or managed more than $80 million directed toward clinical trauma research for 22 studies in 35 cities and 25 states, involving more than 64 investigators.

NTI and other CNTR members held their first annual Trauma Research Advocacy Day in Washington D.C., securing $10 million for a Trauma Clinical Trials Network to be created within the DoD that will include both civilian and military trauma research centers. Two current NTI studies received $1 million in continued funding via the Joint Warfighter Medical Research Program.

NTI requested and secured a $5 million appropriation for the DoD budget to develop a National Trauma Clinical Research Repository. Together, NTI, AAST, EAST, ACS-COT and WTA launched the Coalition for National Trauma Research (CNTR) to advocate for a sustained and significant level of federal funding for traumatic injury research.

NTI continued to grow its presence on the national stage, meeting with the White House and with those federal agencies and offices engaged in trauma care or research.

In response to NTI’s request, Congress appropriated $10 million in the Department of Defense budget for non-compressible hemorrhage projects.

NTI was successful in advocating for additional appropriations for the Department of Defense (DoD) of $2 million for non-compressible hemorrhage research and $2.4 million for Trauma Care, Research and Training.

The TRISAT Board voted to take the organization national, established a national Board of Directors and chartered the National Trauma Institute (NTI) in January. 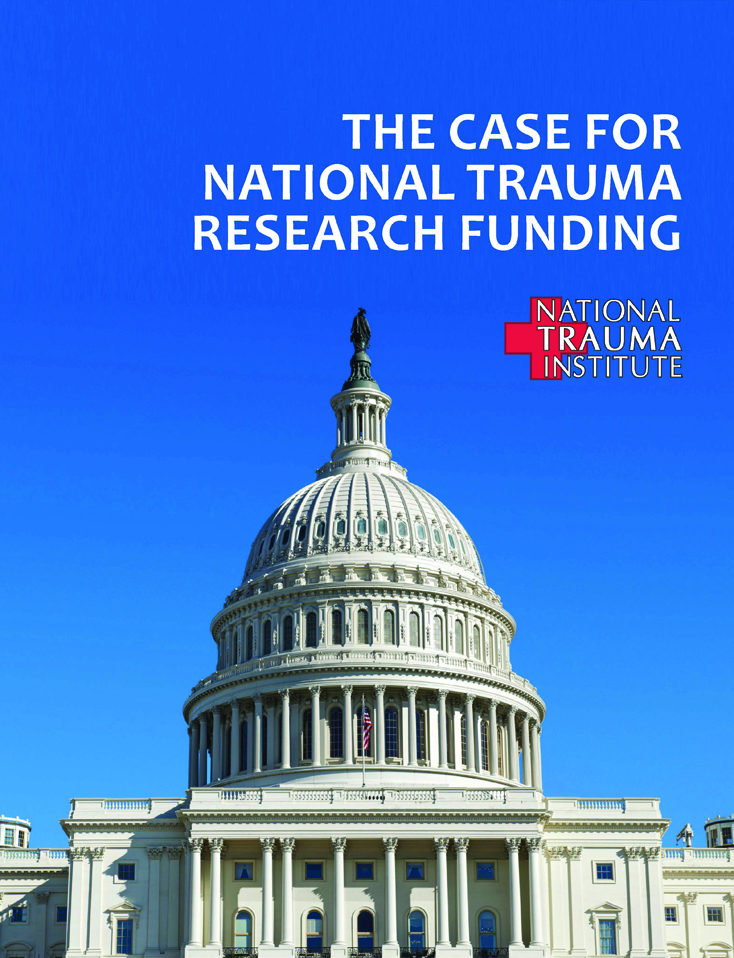