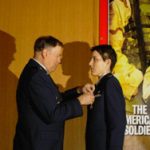 Top of her ROTC class at the University of Florida, she was selected to serve in the notoriously competitive Air Force Office of Special Investigations. “I made OSI my goal because it was hard to get into,” Frentz said. “I just wanted to prove I could do it.” Out of the 2002 nationwide pool of cadets, only seven lieutenants were chosen for the OSI.

Deployed near the beginning of the war, Frentz was prepared to die. She knew that was a potential outcome of a Baghdad tour, even though she wasn’t in a combat unit. “I knew I could die, but never did I think that I’d come back hurt.” Being hurt is only half-way to being dead.

The day she only went half-way was October 14, 2004. Stationed at the Baghdad International Airport, Frentz and two other OSI agents had just ordered lunch and sat down in a Green Zone café. Another investigator in their unit had to meet an informant in the Green Zone, and because it was unsafe to travel alone, they had all armored up and made the trip. The three were now biding their time waiting for their colleague.

They shouldn’t have been there.

The tented café was crowded, and Frentz remembers looking around and noticing that there was no one else in camouflage there—no military. She would later learn that the command had warned U.S. military units to stay away from the café, but since the OSI was not located in the Green Zone, they did not get the message.

They heard an explosion and were surprised at how powerful it sounded. In the first Green Zone security breach of the war, a suicide bomber had detonated himself in a bazaar down the street. Before the officers had time to react, a second bomber blew himself up in the café, 10 feet away from Frentz’s table.

She remembers only searing pain; everything else she knows about the attack comes from other people, from news accounts and photos, and from the reminders of that day that are permanently etched into her arms and legs, her jaw and torso.

Frentz sustained third-degree burns on 30 percent of her body, shrapnel riddled her jaw and ripped through her abdomen, lacerating her liver and a kidney. Her left ear was nearly blown off her head. Military doctors who happened to be driving by pulled her out of the burning tent, half dead.

There are many reasons why Therese Frentz is not dead or more seriously disabled. She received care swiftly, trauma doctors employed a newly developed false skin that helped heal her wounds enough so that skin grafts could be more successful, and they reattached her ear. “If it had been a decade earlier, I would have lost my right arm,” she said. “I don’t even know what all they did, but whatever it was, it saved my life.”

In the seven years since the attack, Frentz has had a dozen surgeries and undergone intensive and painful physical therapy. She has recovered a full range of motion in her extremities and partial hearing in her left ear, and she doesn’t even notice any complications related to her internal injuries.

Yet, she’s not who she once was.

“The worst thing is the skin,” Frentz said quietly. Because burned skin has no pores, she can’t sweat, and so she must be careful about being outside too long or exercising vigorously. And she has not quite come to terms with the psychologically devastating reality of the extensive scarring. “On men, scars can be sexy, but on women, they’re just ugly.” She wears long sleeves even in the mid-August heat of the Texas summer to hide them.

Every six weeks Frentz drives from her home in Del Rio, Texas to participate in a study at the BAMC Burn Center exploring the benefits of CO2 laser surgery, a grueling treatment designed to replace collagen in burned skin to make it more supple and keep it from tightening. The regimen leaves her swollen and sore every time, but she keeps at it.

For someone who always gave life everything she had, half-healed, the 31-year-old feels unable to completely move forward. “My main struggle is to figure out what to do next,” says Frentz, who left the Air Force as a captain. More difficult than any previous accomplishment, conquering half-way is now her goal.

[Every year in the United States, 1.1 million burn injuries require medical attention, 4,500 people die from their burns, and another 10,000 die from burn-related infections.

The scarring that occurs after a third-degree burn has a significant impact on quality of life. Burn scars are both aesthetically and functionally challenging, causing itching, lack of movement, pain, and diminished sensory perception, and often require follow-on surgeries. When the dermis is destroyed, the scars do not regrow hair, nerves, or sweat glands, posing additional challenges to body temperature control.

While many methods of treatment and coverage for third-degree burns exist, none provides fully functional skin repair or replacement. Skin substitutes composed of cells from the patient’s own skin require doctors to create a second wound site from which the healthy cells are harvested. Skin substitutes composed of human cadaver skin or animal products present problems with rejection and possible disease transmission. Completely synthetic options provide only a biological dressing, and other skin substitutes require multiple applications over time, driving up costs and diminishing effectiveness. 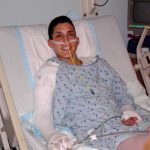 The need is for a tissue-engineered skin for skin replacement. Burn survivors need skin made from cells and extracellular matrices that enable healing and cell differentiation into sweat glands and hair follicles, and provide strength and manageability. This extremely challenging undertaking can be addressed with funding directed to this important area of research. The most promising treatment is ReCell, a technology to take cells from the patient and spray them onto a wound to begin the grafting process. This would significantly decrease the donor site area, and should outperform existing technologies because it is immediate and includes the full range of cell types found in normal skin. Currently in the trial phase, this technology is not yet approved for commercial use.]

Our next manuscript describing the results of our Delphi surveys of trauma research gaps has been pre-published in @JTraumAcuteSurg Find out what the NTRAP Critical Care Panel prioritized @kBraselDazzle @bulgercot @callcura https://bit.ly/NTRAPCriticalCare