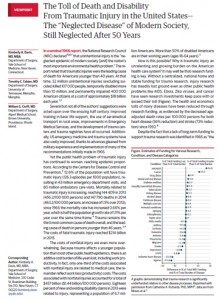 Despite significant advances made in U.S. trauma care and systems over the past 50 years, traumatic injury continues to be an unacceptable and increasing societal burden, argues Kimberly Davis, MD, in an opinion piece published in JAMA Surgery in December. Davis is a professor in the Dept. of Surgery at Yale University and a member of the executive committee of CNTR, the Coalition for National Trauma Research. The National Trauma Institute is a member of CNTR.

Davis and co-authors Timothy Fabian, MD, and William Cioffi, MD, point to the lack of a centralized national home and stable funding stream for trauma research to explain how this public health problem has reached epidemic proportions. “…[S]ince 1966 the mortality rate has increased 0.66% per year,” they say. And the annual costs are astronomical: $214 billion for fatal traumatic injury and $457 billion for non-fatal injuries, including healthcare and lost productivity.

Davis et al. consider the billions of dollars in research funding directed toward Ebola and Zika–both serious public health issues in recent years, yet neither impacting the United States to any degree–and wonder about the lack of attention paid to trauma. “It is shocking that nearly 150,000 deaths every year do not warrant a similar response.”

CNTR is pleased to welcome @AnticoagForum as its newest affiliate member! CNTR now reaches more than 170,000 multidisciplinary healthcare professionals across the spectrum of injury care through its 20 members @elliotthaut @bulgercot @benzarzaur @callcura