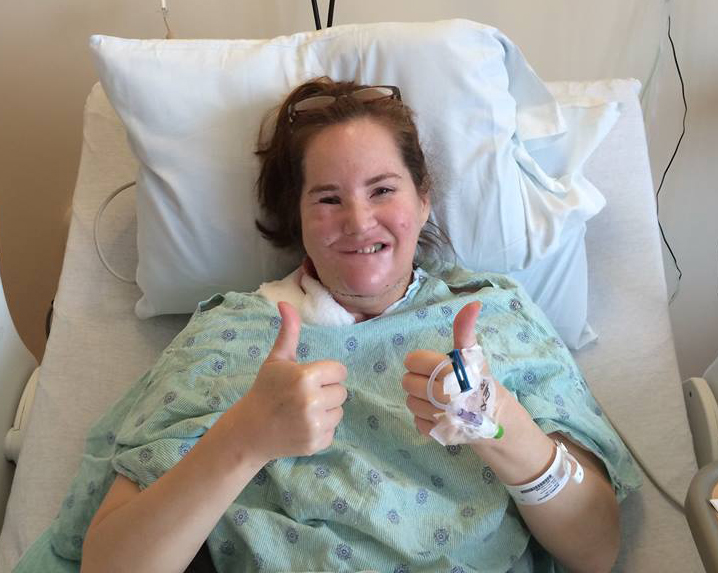 A punishing wave of setbacks had beaten her down to the point where ending her own life seemed to be the only avenue for relief. A fall down a staircase left her with a traumatic brain injury that altered her brain chemistry and extinguished her cheery disposition. She lost a job she loved, which, in turn, stripped her of affordable access to medical care and medication for her head injury. She ran through her savings while unemployed. Christen’s best friend, her grandmother, passed away, as did a beloved dog. Her boyfriend broke up with her, and she was evicted from her apartment.

Depressed and suicidal, she used a 357 Magnum revolver meant for personal protection to harm herself in the most horrific way possible. She shot herself in the face.

But just as the negative energy had built up to knock her down, equal and opposite forces engaged in an instant to pull her back up. The bullet missed a crucial part of her brain, leaving her mental capacity intact. Her roommate arrived unexpectedly just as the gun discharged, and his frantic response summoned emergency medical care immediately. There was a Level 1 Trauma Center nearby, Inova Fairfax Hospital, with surgeons and specialists on 24/7 call, to which she was airlifted within minutes. Her family and friends rallied heroically. From that moment on, her parents—who had divorced acrimoniously years before—put their differences behind them and became united in caring for their daughter.

After three weeks floating in a fugue state at the Inova Fairfax Trauma ICU, Christen awoke to her new life. “My dad was there holding my hand. He told me I’d shot myself and said, ‘All you have to do from now on is heal; we have taken care of everything else.’”

“The police, the medics, and the detectives all said they were baffled why I wasn’t dead.” Fortuitous timing, a lucky miss, nearby expert medical care, a supportive family and, later, a new reason for living, a way to contribute, the love of her life, and a return to unrelenting optimism—Christen has been to hell and back. And she’s determined that her harrowing experience will serve a greater good.

To date, Christen has been through 49 surgeries—almost all conducted by Dr. Reza Mirali Akbari. “He’ll do a surgery, let that heal and settle, and then decide what’s next. He’s a brilliant surgeon,” she says admiringly, “and he has presented my case at many conferences on healing and firearms victims.” From the very beginning, Christen released all photos and information about her case for educational purposes, essentially donating her body to science while still living. 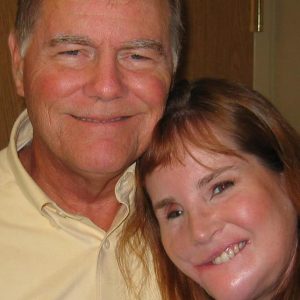 Her recovery hasn’t been easy. She suffered through a tracheotomy and a feeding tube for two years, and there is no part of her body that’s been unaffected by the surgeries, as bone and tissue is mined from healthy areas to reconstruct her face. “I’ll never look normal, even though Dr. Mirali has promised I will be as symmetrical and as scar-free as possible,” she acknowledges. “I was a very pretty girl, and now I have all this damage—but when I look in the mirror, I see myself there, not the disfiguration.”

And every day is a blessing to her. “I have love in my life again, which is a big part of my healing,” Christen says. “I met Dave through my favorite nurse at Fairfax Hospital, and it is the best relationship I’ve ever had—he has gotten me through some very bad years.”

She serves as a peer visitor at Inova Fairfax, meeting with trauma survivors, offering up a little of her story, and providing the understanding and support that she knows is key to thriving after being in such a dark place and surviving such an injury. “I know what a difference it makes to have someone come in and hold your hand and understand,” she says. “I tell them to have hope. You will not always feel this way, no matter what you’re going through.”

Christen is now an integral part of the trauma care continuum that starts with emergency medicine continues through trauma surgery, therapy, rehabilitation, and mental health care. Her efforts contribute toward the common goal of zero preventable deaths and disability after injury, and it took her walking through the entire continuum herself to get there.

“I don’t believe that things happen for a reason, but that it’s up to us to create reason from the things that happen.”