During Trauma Awareness Month: A Program to Stop the Bleeding 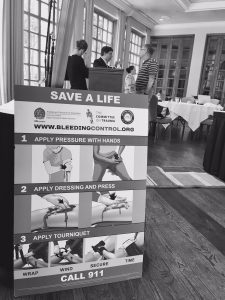 Dr. Ronald Stewart answers questions about the Stop the Bleed program, which he presented to a Rotary Club in San Antonio this week.

Dr. Ronald Stewart, Chair of the Department of Surgery at the UT Health Science Center San Antonio, has an audacious goal: to teach 200 million people a simple approach to stop life-threatening bleeding. As Chair of the American College of Surgeons (ACS) Committee on Trauma, Stewart is an ambassador for the Stop the Bleed program, a nationwide campaign sponsored by the ACS and the U.S. Department of Homeland Security.

“We want to turn bystanders into first responders,” he explained, as he began his presentation to a roomful of Rotary Club members in San Antonio this week. By remembering the ABC’s of bleeding, people who witness terrible accidents, car crashes, blasts, or shootings can save lives. Uncontrolled hemorrhage is the leading mechanism of death resulting from a traumatic injury.

The ABC’s of bleeding are:

B-Bleeding (locate the source of the bleeding)

“Often people are worried they might hurt the victim they are trying to help,” he said. “But if the victim dies, that’s a moot point.” Dr. Stewart encouraged the audience to act fast and not be afraid. An effectively placed tourniquet is going to hurt, but it’s better to cause a few bruises and save a life, he noted. 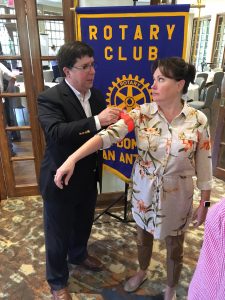 The very best option is to have a bleeding control kit on hand, which will include a standard tourniquet and sterile hemostatic dressings to use for compression. “But if you don’t have a tourniquet or hemostatic gauze (such as QuikClot or Celox), stuff any gauze or clean cloth directly into the wound and apply pressure,” Stewart instructed. “It’s better to pack the gauze into the wound than to simply hold it on top of the wound.”

“The only thing more tragic than a death is a death that could have been prevented,” said Stewart in urging the audience to learn the technique, purchase bleeding control kits, and spread the knowledge.

Order your Bleeding Control Kit. Contact the ACS Committee on Trauma at 1-877-305-9440 to become a Stop the Bleed trainer.