Despite Tragedy, Quin Lewis Lives Life to the Fullest 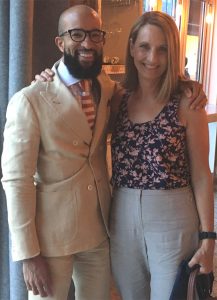 Trauma patient Quin Lewis and Dr. Rosemary Kozar, a member of the team who saved his life.

Perhaps those words had never actually escaped Quin Lewis’s lips. But he is one who knows. He was literally hit by a bus while walking across a Houston intersection, and survived to tell the tale—and to enjoy his life, despite the tragedy.

When Quin arrived by ambulance at Memorial Hermann that night in 2005, surgeon Rosemary Kozar was on trauma call. He was bleeding to death and was in hemorrhagic shock. “I remember his CAT scan—he had abdominal injuries, a pelvic fracture and lots of bleeding—his femoral artery was severed. We gave him blood products, but he was still bleeding, and his renal function was elevated,” she recounted.

Dr. Kozar is surprised that she remembers so much about Quin’s particular case, out of all the emergencies she has attended to during the course of her career. “There’s just something about him, he’s a remarkable person,” she said. “You don’t often get to know the people who come through trauma, since they are so sick.” But Quin was different. “His attitude was absolutely amazing.”

He was fortunate—if one can be considered fortunate after being hit by a bus—to be in Houston, where he had been dispatched from his job at the Department of Homeland Security as a volunteer on a FEMA assignment following Hurricane Katrina. Aside from the very competent Dr. Kozar, renowned trauma pioneer, Dr. Red Duke, was also on duty.

The trauma team addressed Quin’s many problems one by one. His pelvic injury required the most severe of surgical responses—an amputation to

remove his entire leg including the hip socket. “He underwent the hip disarticulation and had multiple abdominal surgeries,” Kozar remembered. “And also had a large open wound on his left leg, which Dr. Duke took care of—he was very good at repairing soft tissue damage.” 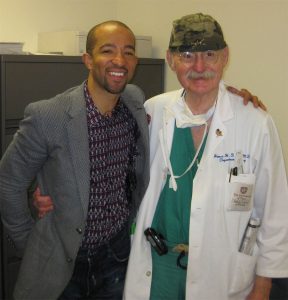 Quin’s six or seven weeks at Herman Memorial was a blur. There was the amputation, repair of abdominal injuries, a tracheostomy to reduce complications due to extended use of a breathing tube, and more.

But finally, he was well enough to be transferred to Richmond, Virginia so he could be near his family. He spent two more months in the hospital there before being discharged. It would be another four years before he could move back to Washington DC to live independently.

Learning to walk again with the prosthetic limb was incredibly difficult—his particular amputation leaves him without a knee joint and makes it difficult to walk on uneven surfaces and to climb up and down stairs. But he does not let his mobility issues slow him down. “I’m thankful that I’m alive,” said Quin. “Mine is not an ideal situation, but I feel blessed to be here and have a full life.”

He lives mostly as he did before, and has learned to function without modifications to his home or car. “I travel a lot, and I work full time for the federal government.” A lover of fashion, he also works part-time as a sales associate at Saks Fifth Avenue and has even participated in fashion shows since the accident.

His advice for those struck by traumatic injury? “I typically say it’s not what you would hope for, but you have to make the best of it. Don’t sit at home and think. If you don’t have a busy life, then create one.”